A few months ago I was invited to submit work for a show at the Gallery Nucleus in Alhambra California. The show’s theme was Rock n’ Roll. One of the options was to illustrate a song or a lyric. I chose to do The Fairy Feller’s Master-stroke by Queen, which was itself a riff on the great painting by Victorian artist Richard Dadd. While working on the painting I snapped some work in progress shots with my iPad. For this blog post I’ve collected some of them to show you how this piece came together and share some of my thoughts at each stage.

I started by carefully drawing the image on a sheet of 300lb Arches coldpress paper. After that I contoured all of the forms using a brush and carbon black acrylic ink. This piece was intended as a fun take on the theme and while I didn’t want to copy Richard Dadd’s unfinished masterpiece, I did want to reference it. I borrowed the main figure and made him my own with the addition of wings and some other accoutrements. There are other references to Dadd’s work such as the daisies and the nuts.

I began painting with Liquitex acrylic ink, which has a particular vividness all its own. It handles somewhat like watercolour and blends well. I found that some of my watercolour technique was not usable with these inks but I really wanted to use just the inks, so I persisted. Why did I start here? I am left handed and this was the most comfortable place rest my brush. I decided at the outset that I would not approach this like a painting, by developing the whole surface. Instead I used the technique that I normally use for my ink drawings, fully developing one area before moving on.

At this stage I moved up because I wanted to paint the bird. I needed something “real” to set up the weirder subject matter. It also established a scale in an image where scale is otherwise almost impossible to determine. I remember feeling really good about the paint on the paper at this point and started working in some darker values. I wasn’t initially sure about the green gown but I knew it would take its proper place in the composition as I went along.

And then downward. With the side developing nicely I knew I had to work along the bottom to establish the foreground plane. It was around this point that I decided on a strategy of working around the border/ frame.

Painting this area was a lot of fun because I got to work on the fungus and introduce some different values. I liked the way the rust of the fungus picked up some of the colour in the fairy wing. 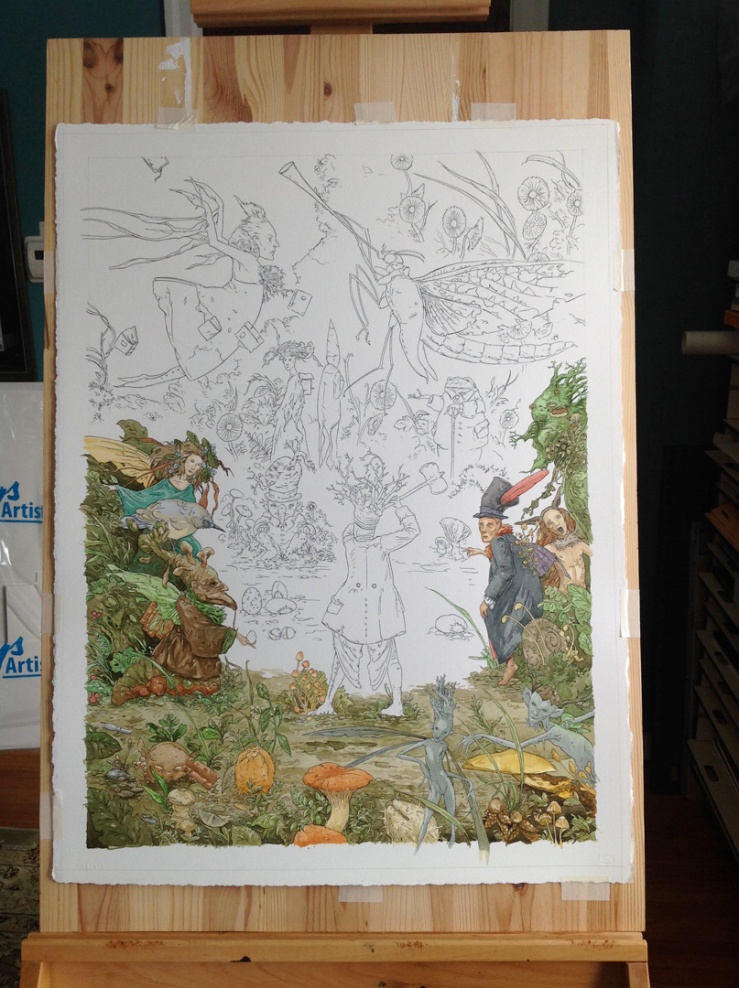 When working on a piece like this with a lot of moving parts I think it is important to create zones of interest. Each area of this composition has something for the viewer to look at. It also gave me the opportunity to work on something different, which is highly motivating; there was always another bit to push me on. Motivation was key on this piece because the timeline for production was very tight. Deadlines! About this time I realized that I needed some red. It was like tasting a soup and knowing it needed salt. Originally the feather was to be a crow feather, but I intuitively realized that it belonged to a cardinal. The red worked nicely against the green tree man.

Now I moved to the upper register. Spatially, the two upper figures are closer than the figures at the side. To stand out, the figures needed to be larger than the others. I emphasized the difference by introducing bolder colours, particularly the blue, which I feared was going to drip down the entire painting as I worked it very quickly.

At this point I was beginning to see the finished piece. I ordered the frame! I wanted to carefully preserve the luminosity in the clearing. It meant that I had to restrain my usual proclivity to go subatomic on the detail. 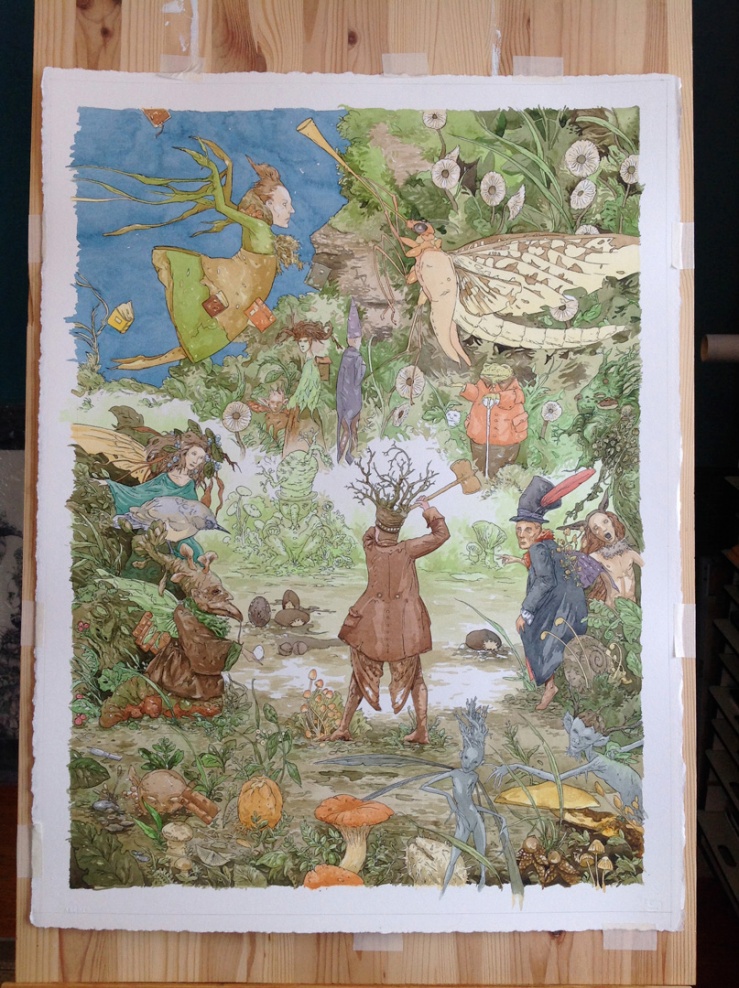 And finished. The Fairy Feller’s Master-stroke ready for the framer.

I am a Canadian artist, illustrator and author. This blog is where I talk about projects that am working on. I show finished works, but I also show works in progress and things that inspire me along the way. Feel free to leave a comment or ask a question. Thanks for dropping by. View all posts by richardakirk