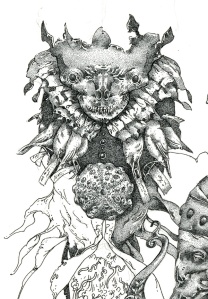 Out if a Violent Planet – Detail

As you can see, progress is being made on “Out of the Violent Planet.” The central figure is very carefully penciled, but I have left myself enough freedom in the peripheral figures to add new details as I go along.  It makes the drawing a little more spontaneous if there are areas where I don’t know ahead of time what is coming next. A little mystery is a good thing. Of course there is always the chance that a bad decision could be made after logging many hours of work! Not withstanding any major screw-ups, this piece will be submitted for the Anomalies show at the Copro Gallery in October. It may also find its way into TOME as I think it works well with the vampire theme.

Speaking of TOME, I am excited to announce that electronic musician Rhys Fulber (Front Line Assembly, Delirium & Conjure One) will be interviewing me on my work for the TOME book. The interview will appear on one of the four pages I have been given to fill. TOME is slated to come out by the end of 2012. Which means that I will have two books coming out with my work in late 2012, the other being Clive Barker’s Weaveworld.

I have it on good authority the Clive is pleased with the Weaveworld galleys and that the book is on target to be delivered to the printer very soon (if it hasn’t already happened).  I will have a limited amount of promotional postcards for Weaveworld, which I intend to hand out at The World Fantasy Convention in November.

If you happen to be going to the World Fantasy Convention, please note that I will have some original artwork in the show. I’m also excited to see the convention book. The con runs through the first week of November. I will be doing some panels but the exact details are still being worked out. Watch this space.

One thought on “September Update”